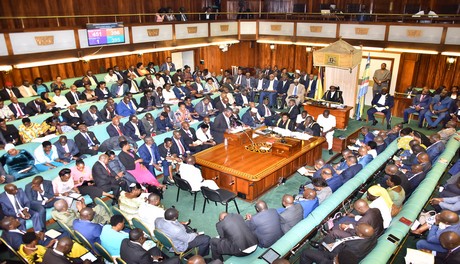 Posted on:
01 Jun 2018
The Deputy Speaker of Parliament, Jacob Oulanyah has directed that evictions in Apaa Parish, Paboo Sub County in Amuru district be stayed until President Yoweri Museveni intervenes.
Oulanyah made the ruling during the plenary sitting on Thursday, 31 May 2018. This followed a call made by the Leader of the Opposition in Parliament, Winfred Kiiza on 30 May 2018, who demanded for an explanation into the persistent land conflicts in Apaa.
“Given that the President has taken the initiative to have a permanent solution to this problem, any activities on the remaining land should cease until the he gets on the ground. The earlier the President goes there, the better for all of us,” said Oulanyah.
According to a report presented by the Minister of Tourism, Wildlife and Antiquities, Hon. Ephraim Kamuntu, out of the 827 square kilometres of the land in question, locals have been evicted from 400 square kilometres.
Kamuntu said that despite the demarcation, locals from Gulu, Adjumani and Amuru districts continue to encroach on the forest reserve.
He said as a result, the government in 2017, embarked on sensitisation campaigns and the communities who were illegally occupying the reserve were given three months to leave.
“Movement of the communities has been peaceful and voluntary, and no person has been manhandled,” said Kamuntu. He added that peaceful means will be pursued through continued sensitisation campaigns on the ground and over radios . to relocate those who are still occupying the protected areas.
“There is no conflict among the people; the conflict is instigated by some leaders who instead of going to courts of law want to incite violence,” said Kamuntu.
He regretted the incident of 23 March 2018 where one of the locals was shot dead by the patrol team.  “It is unfortunate that a group of 20 youths suspected to have been poachers, and armed with bows and arrows, attacked a patrol team. The team had tried to avoid confrontation with the hostile  group and retreated from the attackers who continued to pursue them,” said Kamuntu.
The First Deputy Prime Minister, Gen. Moses Ali also appealed to MPs to allow the President to resolve the issue. He said that President Museveni has already committed to solving the Apaa land conflicts and he should be given the opportunity to do so.
“Even if the President is going to de-gazette the land, he will have to follow the procedure and consult the people of Adjumani,” said Gen Moses Ali.
The Minister of Local Government, Hon. Tom Butime informed members that the Department of Survey and Mapping in the Ministry confirmed that Apaa village is  in Adjumani district. He added that Apaa lies in  a gazetted national park and forest reserve.
“The issues pertaining to the location of Apaa village was resolved by the Ministry of Lands, Housing and Urban Development.,” said Butime.
Following the statements, Members of Parliament from Acholi accused the Uganda People’s Defence Forces(UPDF) and Uganda Wildlife Authority(UWA) of carrying out illegal and forceful evictions and  destroying the property of the  locals.
Hon. Akol Anthony (FDC, Kilak North) questioned why evictions were still ongoing even after the President gave a directive through the Deputy Speaker stopping the evictions.
“Has any other instruction been given by the President that the evictions should continue, or is there somebody in the country who is bigger than the President. That is the question to be addresed,” said Akol.
Hon. Lucy Akello (FDC, Amuru District) said that district leaders were not consulted when the boundary survey was done in 2015. She contested the statement that the evictions are done peacefully.
“To-date, the total number of people who have died is more than 15 and the total number of houses burnt comes to 737. If we want to really handle this problem, we need to be very sincere,” said Akello.
Hon. Gilbert Olanya (FDC, Kilak South) accused government of evicting the locals to clear the land for an investor from South Africa. “The investor is already advertising that he has acquired about 42 square kilometres of land in Apaa. Government should instead de-gazette the land for the locals and find better ways of getting land for investors,”said Olanya.
Hon. Angel Mark Dulu (NRM, Adjumani East) however, accused those claiming to be evicted of having vested interests in the land. “It is not right for human beings to occupy wildlife reserves. Before we come up with a tangible solution, we have to allow facts to come out,” said Dulu.
Hon. Lyandro Komaketch (DP, Gulu Municipality) cautioned Members against inciting violence.  “Government should embark on capacity building of leaders in conflict management ; the Office of the Prime Minister should take this seriously,” said Komaketch.
Land conflicts in Apaa started as far back as 2015, following a move by government to compulsorily demarcate the boundary between Amuru and Ajumani district.  Since then, the tensions have led to continuous evictions of the locals, loss of lives and property.