The Parliamentary Forum on Climate Change-Uganda (PFCC-U) was formed in 2008 by members of the 8th parliament to respond to the pressing environmental, social and economic issues presented by Climate Change. The Forum was first registered as a company Ltd by Guarantee without share capital on 9th April 2009 Reg No.10792. Later the Forum got registered with the NGO Board as an Indigenous NGO Registration No. S.5914/12463 on 19th May 2016. Based on the subscription of the 10th Parliament by 20th July 2016, the Forum has a membership of 215 of which 80 are females. Being among the first parliamentary forum on climate change in Africa, the forum has influenced parliamentary climate change dialogue and reforms in many regions of the continent.

PFCC-U takes cognizance of the need to enhance the legislative, oversight, budgeting and representation roles of parliamentarians as a mechanism for mainstreaming climate change concerns into the national and global development frameworks such as the National Development Plan (NDP), Sustainable Development Goals (MDGs), the Nationally Determined Contributions (NDCs), the climate Change policy and the Green Growth Strategy (GGS). The Forum accomplished its first strategic Plan 2013-2017 and developed a new strategic Plan to guide its interventions for 2018-2022 with the following descriptions; 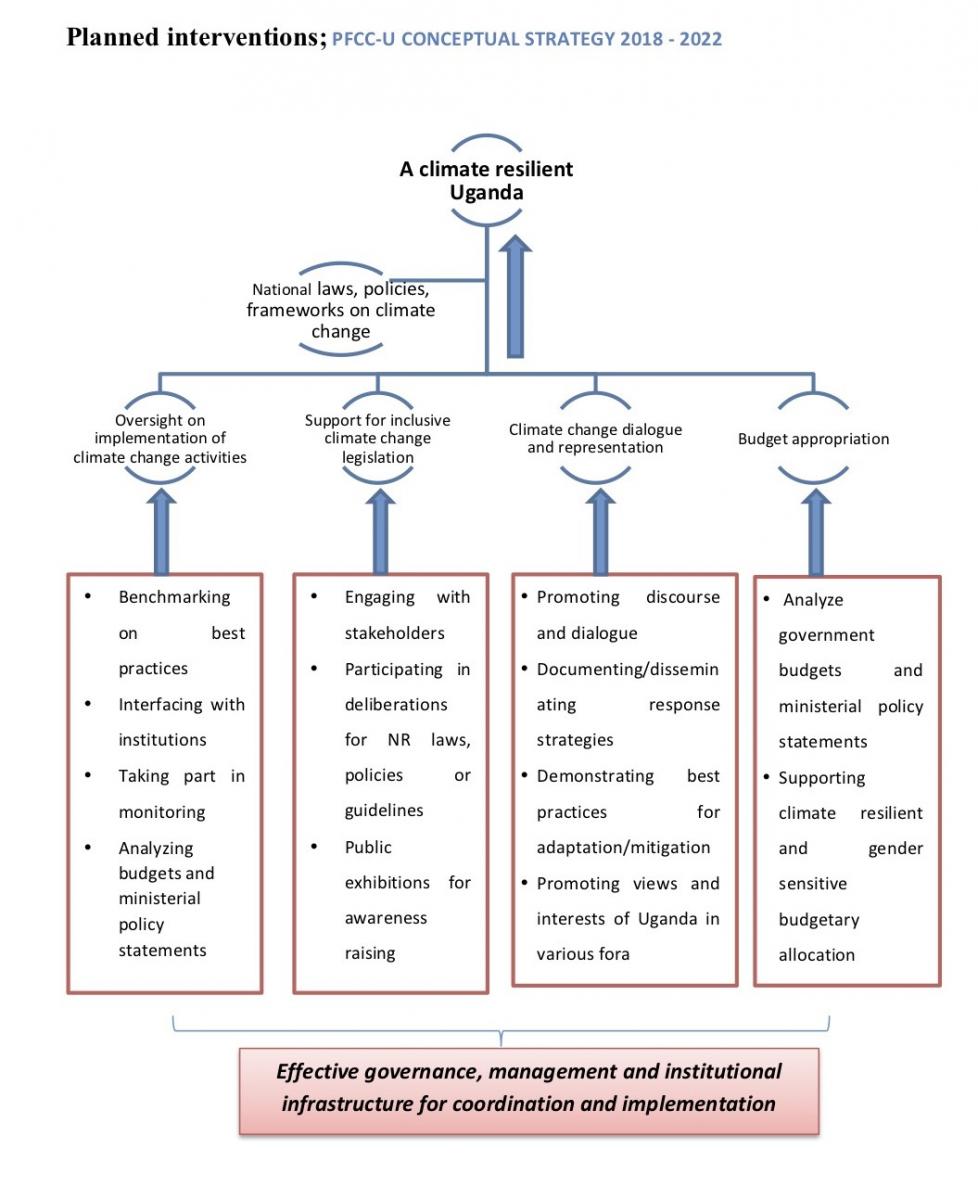 Acomplishments over the years

i) Awareness and capacity building for Members of Parliament and selected constituencies on the implication of climate change effects and legislation.

iv) Supporting national REDD+ process; forum members participated during the advance consultations for developing the REDD+ R-PP and the Consultation and Participation plan submitted to the World Bank/FCPF.

v) Influencing global climate dialogue; PFCC-U has always been represented among the government delegation for the United Nations Framework Convention on Climate Change (UNFCCC) Conference of Parties (COPs) since 2010 in Cancún, Mexico to date where members actively participated in several sessions of the conferences. In addition, PFCC-U has been taking part in the International Renewable Energy Agency in the quest to direct Uganda’s transition to a sustainable energy future.

vi)The previous and current Strategic Plan involved a number of consultations from the Members and other stakeholders.

vii) Promoting PFCC vision; several stakeholders; government agencies, CSOs and development partners have been sensitized about the unique climate change mitigation/adaptation opportunities that can arise through the forum. Some have expressed interest in working with the forum.

viii) Increase in subscription; membership was 45 at the commencement of the ninth parliament. This has since more than doubled over time to date with over 200 membership by MPs.

Institutional setup The Forum Patron is the Right Honorable Speaker of Parliament. On 19th July 2016, the Forum elected the new leadership of the 9 members that form the Executive Committee as below;

Our funders
PFCC-U has continued to receive financial support and funding from different agencies locally and internationally to whom we are so grateful. We are particularly grateful for the continued funding from Parliament, Partners for Resilience (PfR) through Cordaid, GIZ, UNDP, FAO, IUCN, Dan Church Aid DFID/UKaid and IITA. We also acknowledge support from the Climate Change Department (CCD) of the Ministry of Water and Environment and, Ministry of Agriculture Animal Industry and Fisheries as well as the Ministry of Energy and Mineral Development.