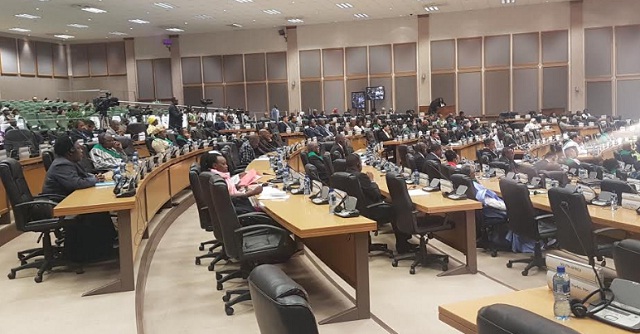 The Pan African Parliament has resolved to engage with national and regional parliaments to have them enact or revise legislation intended to fight corruption.

In one of the resolutions adopted during the Third Ordinary Session of the Fifth Parliament, PAP also agreed to engage with and have African national and regional parliaments effectively exercise their oversight, legislative and representative roles to ensure an effective management of sovereign debt and the breaking of the cycle of corruption, particularly through timely tracking and oversight of public and private partnerships and the audit of national sovereign debt, financial flows, revenue and procurement.

The resolution on managing debt and fighting corruption in Africa was one of the ten resolutions adopted at the end of Third Ordinary Session of the Fifth PAP in Midrand, South Africa on Thursday 17 October 2019. The sitting was chaired by PAP President, Hon. Roger Nkodo.

“Corruption and illicit financial flows threaten our goals to end poverty and hunger in Africa and to achieve sustainable development in its three dimensions through promoting inclusive economic growth, protecting the environment and promoting social inclusion,” read part of the resolution adding that “Illicit financial flows cause shortage of money available for states to spend on national development, which result in borrowing and the rising levels of sovereign debts in Africa.”

PAP also resolved to support and promote the role of parliamentary anti corruption networks, citizenry, the media and civil society in promoting the culture of transparency, probity and accountability and in preventing illicit financial flows.

Other resolutions adopted were on: