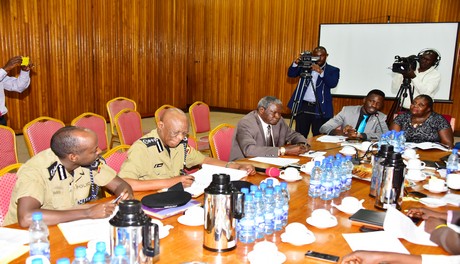 Police is proposing the scrapping of the Constitutional requirement to produce arrested or detained suspects before court within 48 hours.
Appearing before Parliament’s Committee on Human Rights, the Police Director of Human Rights and Legal Services, Erasmus Twarukuhwa, said that they intended to present the proposed amendment to the House.
“To present suspects to court within 48 hours presents a lot of challenges. Some magistrates work for only a few days and over a wide area,” said Twarukuhwa.
Twarukuhwa was part of a Ministry of Internal Affairs delegation led by Hon. Obiga Kania, and the Inspector General of Police, Martin Okoth Ochola that appeared before the Committee on Human Rights to answer queries in the 19th Annual Report of the Human Rights Commission. The meeting was held on Tuesday, 15 May 2018.
“The 48 hour requirement is not very realistic in all cases. It is our intention to propose a Constitutional amendment where this requirement will only apply to the majority of cases but not all,” he added.
The Constitution provides that a person arrested or detained for the purpose of bringing him or her before a court in execution of an order of court; or upon reasonable suspicion of his or her having committed or being about to commit a criminal offence under laws of Uganda, shall, if not earlier released, be brought to court as soon as possible but in any case not later than 48 hours from the time of his or her arrest.
Legislators were however, against the proposal saying that 48 hours were sufficient to produce a suspect in court.
“Other countries are working at reducing their time and Uganda is working at removing it or increasing the time; 48 hours is a very long time to get a criminal, carry out the necessary investigations and produce them in court,” Hon. Veronica Isala Eragu (NRM, Kaberamaido) said.
Members wondered what Police was doing about Police officers accused of or prosecuted for torturing suspects in custody.
“I would like to know the status of the police officers that have been prosecuted for torture, those who have been acquitted and those arrested so far,” said Hon. Safia Nalule (NRM, PWDs, National), the Vice Chairperson of the Committee.
Twarukuhwa said that the Police had started prosecuting the officers accused of torture according to the Prohibition and Prevention of Torture Act, 2012.

He said that currently four officers have been taken to court for torture committed against the Kamwenge district Mayor; the officers, who separately assaulted a worker at Mukwano Industries and Dr. Kizza Besigye; and that the DPC who assaulted a journalist was convicted and the necessary procedures for his dismissal had commenced.